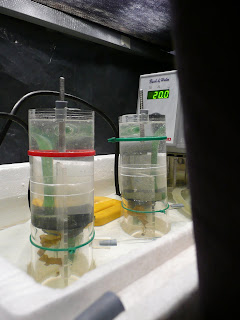 This is kind of slow at first, but really picks up… Watch it! You will not regret it. Sit back and enjoy the wonderful pictures, the excitement and one hell of an explorer :) Kudos, Edith Widder!

Today we had a breakthrough at Marinbiologene DA. The first sketchy parts of our blog was formed, and it is already starting to look promising. Next out is getting our website up and running. Really looking forward to that. The idea that brought forth this project was first conceived in 2006. It’s been on hold partly because we didn’t quite know where to begin and partly because of other work that had to be done. Our aim is to establish a base of information concerning research on marine biology in Norway, monitoring, conservation and management of our coastal systems and to educate people on the importance of caring about the marine environment. These are our first baby steps… Read all
Newer Posts Back